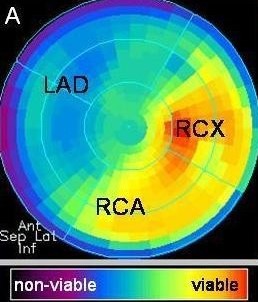 This project aims to add polar map funcitonality to SlicerHeart. Polar maps provide a standardized 2D representation of the 3D LV myocardium for consistent comparisons across different patients or over time, and allow the entire LV to be viewed at once in a single 2D image. Polar maps are commonly used in: -nuclear imaging (PET, SPECT) to show perfusion or other radiotracer uptake -scar imaging (LGE MRI or LIE CT) to show contrast washout to identify regions of scar -anatomical imaging (CT, MRI or Echo) to show myocardial wall motion or thickening, typically to identify regions or scar or hypomobility This project looks to create a module within SlicerHeart to enable the creation of polar maps for each of these use-cases.

An example of 17 segment display of LV wall thickening:

We have some PET and SPECT images to use for nuclear imaging polar map development. We also have 3D Electroanatomic Voltage Maps for converting a 3D surface into polar map. These will be linked prior to project week. TBD - we have not yet found any LGE MRI or LIE CT images to use for testing yet, so we wll probably start by working on the pathways for which we have data to analyze.

Polar maps enable properties of the left ventricle, a 3D object, to be viewed entirely in 2D. Apical segments of the LV are shown in the center of the polar map, and basal segments are shown near the perimeter. Polar maps are viewed as if looking at the myocardium from the apex with the anterior LV wall at the top and the septal wall to the left. They are commonly used to show perfusion or tissue health. 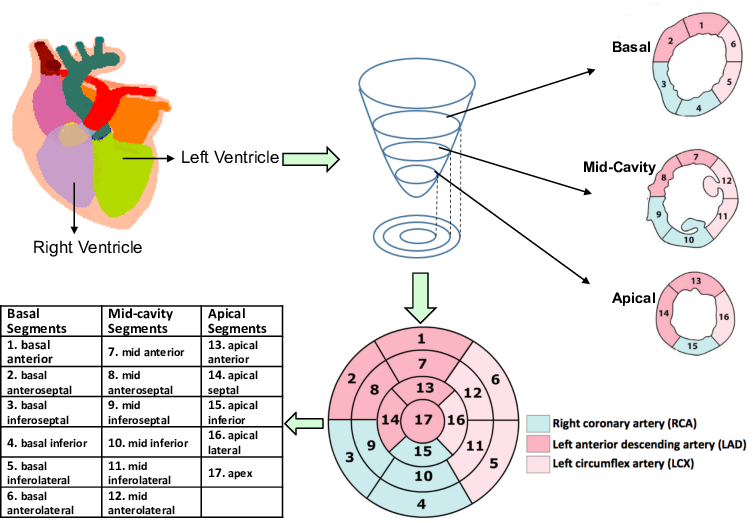 The 17 segment model is a standardized myocardial segmentation nomenclature used to discretize segments of the left ventricular myocardium. The model describes the left ventricle as 17 distinct segments - 6 basal segments, 6 mid-ventricular segments, and 5 apical segments. Physicians may be familiar with looking at the heart in transaxial slices on CT, in cardiac planes, or literally through the chest wall (e.g. surgeon). The 17-segment model is very commonly used and can act as a common-ground for physicians with different backgrounds. Assigning characteristics to each of these 17-segments is commonly used in cardiology, be it to describe the health of the tissue for the corresponding region, or to draw attention to an anatomical anomaly in a certain region. It is particularly helpful in considering bloodflow because each of the 3 main cardiac arteries source distinct segments of the 17-segment model. More on the definition of the 17-segment model can be found in [this American Heart Association paper] (https://www.ahajournals.org/doi/pdf/10.1161/hc0402.102975) 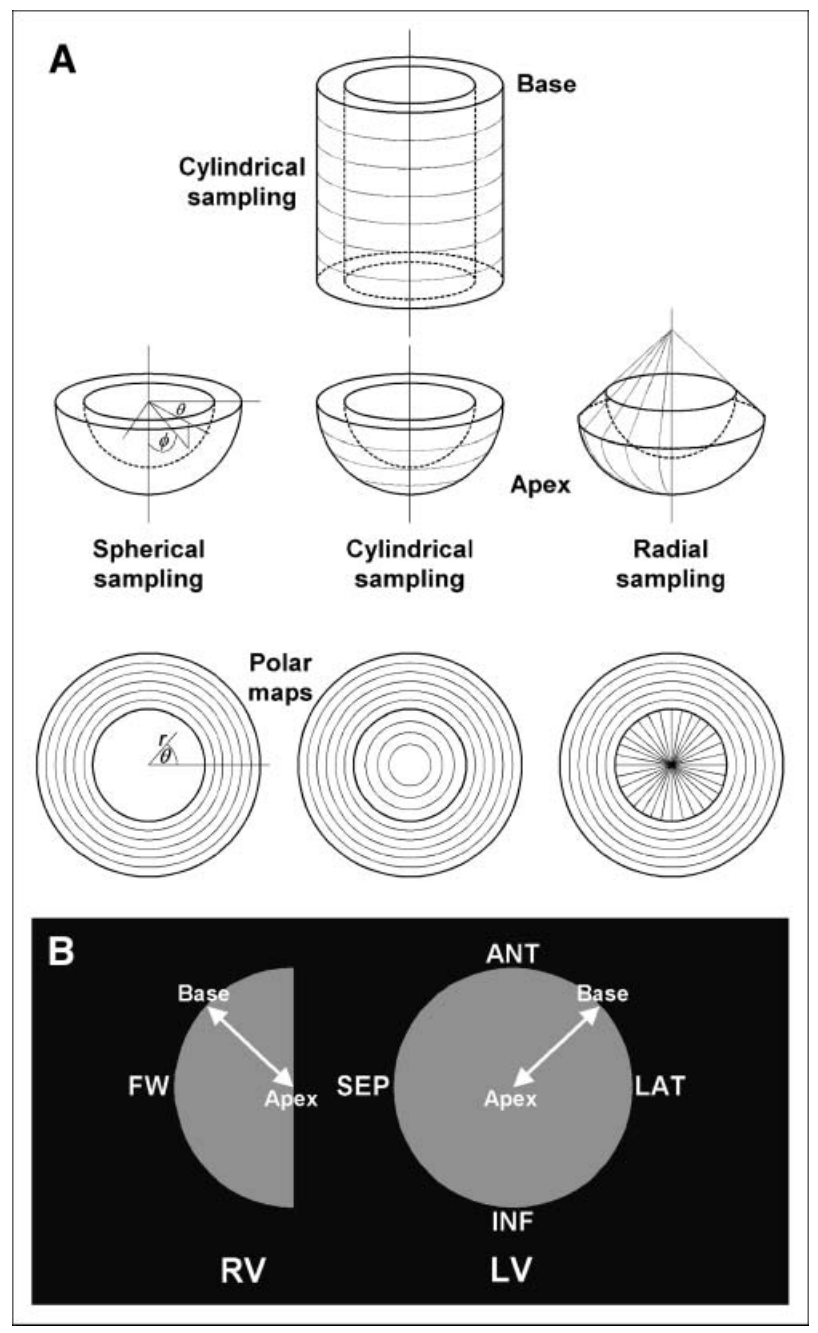 All polar maps sample the basal and mid segments the same, but there are 3 different convensions to how to sample the apex. These are described in more detail in Lin, G. Sharat et al. “Automated Quantification of Myocardial Ischemia and Wall Motion Defects by Use of Cardiac SPECT Polar Mapping and 4-Dimensional Surface Rendering.” Journal of nuclear medicine technology 34.1 (2006): 3–17. Print.